Women in Construction: People often mention the construction industry as an example of a profession where males perform the majority of the labour.

This significant disparity might be attributed to a variety of factors, including unfavourable preconceptions about construction workers and the sector as a whole, a lack of training opportunities, and unconscious prejudices against women. Despite these obstacles, women continue to pursue jobs. According to Randstad, the number of women working as construction managers in the United Kingdom increased by 9% between 2018 and 2020.

Companies are actively striving to employ more women to fulfil the predicted increase in demand for qualified workers, as the construction sector is forecast to generate around 2 million positions by 2022. What precisely can women accomplish in the construction industry?

Despite these disheartening statistics, many firms are taking initiatives to boost the number of women in executive positions, and women who are currently in the sector are acting as role models for the next generation.

The number of women in leadership roles is increasing, although it remains low. Many of the female executives and construction managers seem to have just been in their positions for the previous five years, indicating that corporations have only recently placed women in positions of leadership.

Kim Roy was named CEO of HITT Contracting in 2017 after serving in various capacities for 18 years. Roy works as a corporate executive. Building Design + Construction Magazine named her one of the Top 40 Under 40 in 2009, and the Commercial Observer named her one of the Top Women in Real Estate – Innovation Award in 2019. Kim told NAIOP that due of her reputation in the construction industry, she would want to see more women work there.

In 2019, Meirav Oren co-founded Versatile, a construction technology firm. Since then, the firm has expanded to become a key participant in the industry. During Oren’s tenure as CEO of Versatile, the business secured more than $100 million in funding and produced CraneView, an artificial intelligence (AI)-powered gadget that makes crane operators safer and more productive.

Kylie Rampa is the Group Head of Investment for Lendlease Australia, a firm that works to create and enhance infrastructure all over the globe. Her new position as CEO of QIC begins in April 2022. She has extensive knowledge in real estate and development. 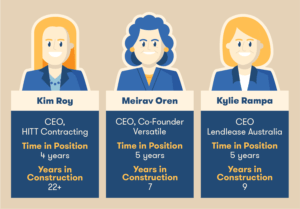 If women wish to work in construction, which is largely done by males and might be risky, they need resources that are tailored to their individual requirements. The good news is that companies and trade associations are working more to promote women at all levels of their organisations and to educate young women about career options.

Nationally recognised organisations such as the National Association of Women in Construction (NAWIC) and Women Construction Owners & Executives USA may be able to assist women entering the construction business via mentorship, advertising, and networking events. Jenny Brongo utilised NAWIC tools to learn how to handle her late father’s firm. In Rochester, New York, she is the president and owner of Brongo Contracting and Supply.

In many regions of the nation, large construction businesses collaborate with local organisations to assist young women and girls who want to work in construction acquire the education they need. Moreover, There are also apprenticeship programmes for women in many cities that assist them get employed, prepare for examinations, and gain the skills they need to perform well on the job.

There are conferences and discussion groups in the construction sector.

Constructing Equality and Tradeswomen blogs address diversity concerns, do original research, identify scholarship possibilities, and share personal tales and anecdotes, which helps women keep up to speed on the subject while they aren’t attending conferences.

Things function because of diversity.

According to McKinsey & Co., organisations with the highest gender diversity are 25% more likely to generate more money than those with less diversity. More diversity, however, is not yet a reality in the construction business. The most effective method to capitalise on the improved economy is to recruit more women in 2021, after the sector has expanded for a year.

According to the findings of that poll, construction organisations with more women in executive roles than in staff positions performed better financially than those that did not. Companies with at least 30% women in leadership positions had a 48% better likelihood of generating money than their least diverse rivals.

Despite the fact that diversity increases performance, Randstad research suggests that female CEOs are more likely than men to work in support jobs (14% vs. 7%). While 33% of males in executive roles are staff executives and 46% are line executives, women hold none of these positions.

Getting more women to work in construction is still a work in progress. Employers should provide customised training programmes and local mentorship groups for women. They should also encourage female role models to be role models for other females. For women and young girls to be interest in working in construction, schools and other educational programmes must emphasise the importance of these vocations.

More women should be recruit in construction since there aren’t enough of them. Companies are often hesitant to test out new construction technology because they lack the necessary personnel. Building businesses might employ and train women to work in IT to assist with labour shortages and to diversify their workforces.

Despite the difficulties that women face in the construction business, diversity has been prove to enhance profitability and is critical to addressing the sector’s talent gap. More and more trailblazing women are breaking down obstacles to equality and paving the way for a more diverse and inviting workplace.

Here’s an infographic with key statistics and images of female executives who are improving the construction business.