What Is Superelevation: The road is usually banked or inclined at an angle to assist cars navigate curves without sliding or losing control. This is due to being too high up.

Drivers using superelevation may stay a safe distance from the road’s edge while still travelling as fast as they can through curves. Many automobiles would slide or skid around turns in wet or sloppy weather without superelevation, particularly if they were travelling rapidly. Some may even collapse. It also assists cars in maintaining a constant speed through turns, reducing the need for frequent stops. 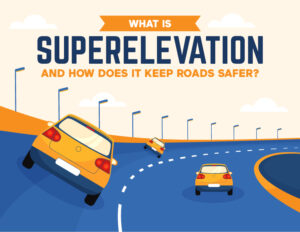 What exactly is superelevation?

In a traffic curve, the outside border of the pavement is elevated higher than the inner margin, which is referred to as “superelevation.” In cross-section, the vertical alignment of the road, commonly known as its “profile,” is a critical safety criterion for any road with curves.

A higher-level roadway needs careful planning. Many resources, such as people and money, are required to construct it. But if done correctly, no one will ever know it’s there.

When discussing a racecourse, the terms “can” or “banking” are more often used than “superelevation.”

So, how should you employ superelevation?

Superelevation employs a variety of forces that act in tandem to keep automobiles stable and on the road while maintaining the same speed around a curve. The interaction of centrifugal force, centripetal force, friction, inertia, weight, and speed on a road or highway necessitates the use of superelevation.

Those responsible for superelevation

Do You know how when you’re going around a curve, you get tugged to one side? You just experienced centripetal force, the side force that causes an item to spin in a circle. You can generate centripetal force by tying a tennis ball to the end of a thread and spinning it in a circle.

Centrifugal force pushes automobiles and trucks toward the inner edge of the pavement when they round a curve in the road. You could slide and fall, or you could do both. It’s the inverse of centrifugal force, which pulls you away from the centre of your automobile and pushes you into your seat as it rotates.

A road with a superelevated curve balances these two forces, as well as numerous others that operate in various ways.

Newton’s Law of Inertia states that if an unbalanced force is applied to anything that is already moving, it will continue to move in the same direction. The “something” in this situation is a curve, or more precisely, the driver’s choice to turn the wheel and modify the direction of the automobile.

Traction, often known as friction, is required to safely shift inertia and direction. Simply described, friction is the amount of resistance you experience when your car’s rubber tyres roll over a smooth surface, such as a road. Its duty is to slow the automobile down by keeping the tyres firmly on the road (which also helps prevent it from sliding or skidding).

The weight of an automobile is related to how well it moves. Because their tyres have to push harder on the road, heavier automobiles usually have higher grip.

The effects of friction may be reduced when the road is wet and moving quickly. Because cold air may transform water into ice on any bridge, this issue is exacerbated on higher-altitude highway bridges.

It shouldn’t be difficult to maintain traction while driving around a curve if you’re travelling slowly and the road is dry. However, the quicker you accelerate, the more resistance you’ll have to overcome in order to maintain your straight-line speed.

Also, if you can’t gain a grip on a wet or slick road, your vehicle may continue to go in the same way even if you attempt to turn it in a different direction.

Centrifugal force may pull an automobile off of a curve and off the road. That is why, while changing lanes on a flat surface, cars must slow down. However, when superelevation is included, the calculation changes.

The only thing that combats inertia while driving straight on a level surface is friction between your tyres. A banked curve, on the other hand, employs centrifugal force to redirect part of that speed back toward the centre, ensuring a smooth and safe turn. 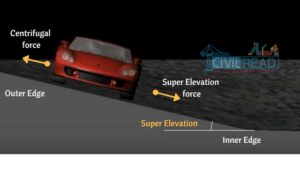 Superelevation has been accelerated.

These bank bends may be see at every NASCAR or Indy car event. Daytona International Speedway’s 31-degree superelevation was install in 1959. It allows racing vehicles to maintain greater speed entering a curve without risking an accident and provides them more momentum exiting the curve.

The cornersof the Martinsville Speedway in Virginia, on the other hand, are bank at 12 degrees since the track is shorter and drivers do not achieve peak speed as frequently. To compensate for the force of the automobiles’ inertia, the bank must get steeper as their speed increases.

Curves with a bank are obviously require for roads and highways. A frequent sort of highway curve or turn is on- and off-ramps that resemble a cloverleaf. However, on a regularly used open road, the highest superelevation that may occur is between 10% and 12%. This is far less than on a circuit like Daytona, where vehicles move much quicker.

Things go awry when superelevation is not apply.

Any road’s plan must include superelevation. You’ll have to be especially cautious around corners if you don’t have it. Skidding may occur if the forces of moving ahead and turning around on a curve are not balance by friction.

It is also critical for the driver to be mindful and understand how much to slow down. This is why guardrails and signage warning of oncoming twists and maximum speeds are place along freeway on-ramps and winding mountain routes. There is also a sign depicting an automobile leaning to one side on its two outer wheels due to excessive speed.

If a motorist speeds too quickly around a left turn without a curb, the automobile may go off a two-lane road. If, on the other hand, you come to an unbanked right-hand turn, your forward momentum may push you over the centre line and into oncoming traffic. Alternatively, if you’re catch in the slow lane on a road with many lanes, it may push you into the fast lane (this will depend on the number of lanes).

Because their centre of gravity is higher, larger automobiles are far more prone to roll over, as previously stated. They might easily roll over if they attempt to take a curve without a bank at too high a speed.

If the superelevation is incorrect, it may result in increased expenses for maintaining curving sections of roads due to damage caused by uneven loads.

How to Determine the Need for Superelevation

When and where superelevation is utilise is determine by a variety of criteria, including the estimated speed of vehicles.

Cars travelling too quickly on these kind of roads, on the other hand, may hydroplane. If there is snow or ice, an additional 8% height may be require.

There is also the issue of deciding what kind of pavement to employ. Because automobiles travelling on bumpier roads would go slower, less superelevation would be require. Aside from the topography, the quantity of traffic (like in cities) may also slow down speeds.

Another factor to consider is the vehicle’s size. Trucks, RVs, large construction equipment, and other vehicles with high centres of gravity are more prone to roll over or tip over on bends without the proper superelevation.

Blueprints and other images are vital when planning for various physical forces and elements of a construction. Aside from the visuals, knowing how to utilise the appropriate phrases is also beneficial.

The superelevation rate is the amount of banking added to a horizontal curve to balance out the centrifugal force of a moving vehicle.

A road’s tangent runout is the distance from a normal crown section to a point. When the cross slope has disappeared and the outer lane is level.

How to Calculate the Superelevation of a Road Using a Formula

Before constructing a road, it is critical to get precise values for all of the design parameters. There are many formulae to consider, including those for minimum/maximum superelevation. The maximum design speed for safety, and needed superelevation transition length.

We offer both the entire and fundamental formulae for the rate of superelevation in this case. The American Association of State Highway and Transportation Officials published. “A Policy on Geometric Design of Highways and Streets,” popularly known as “The Green Book,” as a guideline (AASHTO). It contains the final rules and formulae for accounting for superelevation.

The radius of the curve and the speed of a vehicle may be utilise to calculate the total superelevation. You must know not only the length of the road. But also its width and speed, which is always 9.8 metres per second2.

It may alternatively be express as the product of the rate of superelevation. Plus the friction factor divid by the product. The rate of gravity’s acceleration and the radius of the curve.

Even if you never perform the arithmetic for these formulae. The next time you’re on the highway, you’ll be able to drive safely and fast around a banked curve. The advantages of superelevation are obvious.

Women in Construction: The State of the Industry in 2022