How Do Generators Work? If you want electricity but are unable to get it from the grid, a generator may be useful. They may be used as a backup power source to keep critical systems functioning at homes, companies, and construction sites when the power goes out. So, how do these machines function?

Generators employ an engine, an alternator, and some form of external fuel supply to convert mechanical energy into electrical energy. Michael Faraday discovered that a moving conductor in a magnetic field may generate and guide electrical charges. He subsequently coined the phrase “electromagnetic induction” to explain how contemporary generators operate. 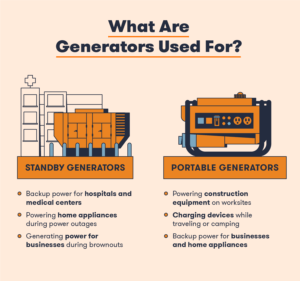 Understanding how generators function from the inside out may help you solve issues, perform basic maintenance, and choose the finest generator for your requirements. This lesson will show you the key components of a generator and explain how they interact with one another.

The eight most significant components of a power plant

The generator’s outer control panel has a multitude of dials, buttons, and switches. The starter, engine control gauges, and frequency switch are all standard components of a generator’s control panel. Other pieces may be present depending on the model.

When and why would you need backup power from a generator?

Power generators may be purchased for usage at home or in the workplace. They are often used as a backup power source in the event of a brownout or power outage, but they may also serve as the primary power source for off-grid buildings or construction sites.

The most popular form of backup generator found in households, businesses, and hospitals are standby generators. When the electricity goes off, these generators connect to the building’s cabling and begin to operate. They can remain in place for a long time and provide power for days before needing to be refuelled.

Portable generators are superior than fixed generators for powering appliances, travel equipment, and construction tools on work sites since they can be transported. Power comes in all forms and intensities. The larger portable generators can power whole buildings, while the smaller ones are generally only capable of running one or two tools at a time. Explains in depth how generators convert fuel into electricity.

Generators do not generate power. They instead convert mechanical energy into electrical power. This procedure is divided into four major steps:

Even though generators have been around for a long time, research and development continue to improve them. These days, generators have a lot of added bells and whistles.

It is not frequently that new technology results in smaller pieces. This is particularly true with generators. Portable generators can now operate for longer periods of time and provide more electricity due to smaller and more efficient batteries and engines. Some commercial generators may even be dragged from one location to another.

It’s not a significant concern in terms of the environment.

More and more generators are powered by non-renewable energy sources. Gas and diesel generators are becoming less common as more individuals choose for solar, wind, and water turbines. People who are concerned about their carbon impact may also use natural gas to generate power.

a large amount of energy is produced

Although individuals at home may not need as much electricity from their generators, industries and construction sites do. Today’s generators often have a capacity of 300 kilowatts or more, which is a positive thing. The largest and most powerful generators continue to need diesel fuel to operate, but this is expected to change as technology advances.

In general, the larger the generator, the louder it will be. Companies have begun to include high-quality noise-reduction capabilities in their products to assist minimise noise pollution. If your generator does not come equipped with a silencer or muffler, you may purchase one separately and install it yourself.

If the electricity goes out, a generator may kick in to keep everything functioning smoothly. Knowing how generators function will help you decide whether to rent one for a construction project or purchase one for your company.

Construction Dumpster Sizes: What To Get For Your Site